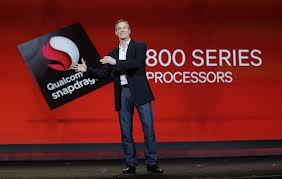 Everyone knows that, when it comes to Information Technology, the common unit of reference when it comes to hardware, is computational power. This unit of measuring the level of “Bad-Ass” in a device, is, quite frankly, a universal constant. Device manufacturers swear by this unit, software manufacturers use this unit to scale and optimize applications, and users literally witness miracles happen under their fingertips. Technology leaps forward a generation with every step increase in processor prowess. So, it goes without saying that, this is an area of Information Technology that we keep our eyes on like a snake on vermin.

In the mobile device arena, we have a few players currently creating waves and basically ripping out a piece of market share to chew on and digest. One of the biggest players is Qualcomm. Obviously, we’ve got our sights on them.

Recently, Qualcomm dropped a doozy. As if the Snapdragon Quadcore S4 Pro wasn’t dominating enough, the ARM based microprocessor giant has released information on their next generation processors. What?? Yes..

Enter the Qualcomm Snapdragon 600 and 800 series.

Lets take a look at the improvements:

Qualcomm claims all of this will enable the processor deliver up to 40% more performance over its current generation SoC (the S4 Pro). That’s a big claim, considering the S4 Pro pretty much wipes the floor with anything currently in similar devices.

Overall, the Snapdragon 800 series is expected to see a 75% performance boost over the S4 Pro.

Oh…and just to make it worth your while, reading this post, here’s a video demonstration of the snapdragon 800 series in action!

When do we expect to see these beasts in consumer devices? The 600 is already being tested and will be commercially available in Q2 2013. We have a feeling the 800 series won’t be far behind. Yep..these guys are on fire.